Wednesday morning found us docked in the historic medieval city of Regensburg, in the heart of Bavaria. This was perhaps my favorite of the Danube river towns, with its interesting mix of historic structures, its blending of many different cultures and architectural influences, and its modern shops and amenities.

Of course it, too, has its cathedral in the central square of the old city.

It was in this town that I uncovered a first hint of a potential Schaller relative. In the northern part of Bavaria, not too far from where my grandfather was born, I was told by a Regensburg shopkeeper that there is an artisan who manufactures decorative Christmas candy containers based on molds he discovered in his great-grandfather’s attic. A new genealogical trail to follow.

In the afternoon we sailed through the scenic Danube River gorge, a wildlife preserve where only a few ships are permitted and regulations regarding engine size, power, noise levels, etc. are strictly monitored. The terminus for that sojourn was – you guessed it – a Baroque-era church on the site of a seventh century Benedictine monastery. 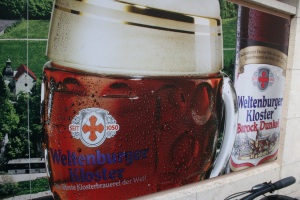 The monks at this monastery have been brewing beer here since 1050, and in my opinion (I tasted it) have gotten pretty good at their craft. We were not able to tour the brewery or obtain any “samples” (those crafty Benedictines!) but we were “invited” to purchase a brew in the beer garden in the courtyard of the monastery.